In part one of our blog series, The United States of Healthcare, we have effectively thrown down the gauntlet[1] that “healthcare is the business of America” today and possibly even more so for the next 10-20 years.

Although the U.S. government did not plan to discuss topics of growth in Gross Domestic Product (GDP) this week, they ultimately announced that 4th quarter GDP in the U.S. economy grew by 2.1%. [2]

WASHINGTON — The U.S. economy grew 2.1% in the fourth quarter, closing out a year in which gross domestic product decelerated to its slowest pace in three years amid a continuing drag in business investment.

The GDP increase matched the third quarter and met expectations of economists surveyed by Dow Jones. For the full year, the economy grew 2.3%, below the 2.9% increase from 2018 and the 2.4% gain in 2017, the first year of Donald Trump’s presidency, according to the initial estimate released Thursday by the Commerce Department.

Based on the following information below, healthcare is not totally identifiable:

The formula to calculate the components of GDP is Y = C + I + G + NX. That stands for: GDP = Consumption + Investment + Government + Net Exports[3]

The link below shows the summary of what the U.S. BEA collected.  For more details, you can read through ten pages of mind-numbing data: https://www.bea.gov/system/files/2020-01/gdp4q19_adv.pdf

Healthcare is not much of a direct component in the calculations as it is generally found under services (see below).  If you drill down the number, it is about $2.5 trillion (USD) in the component that makes up services. 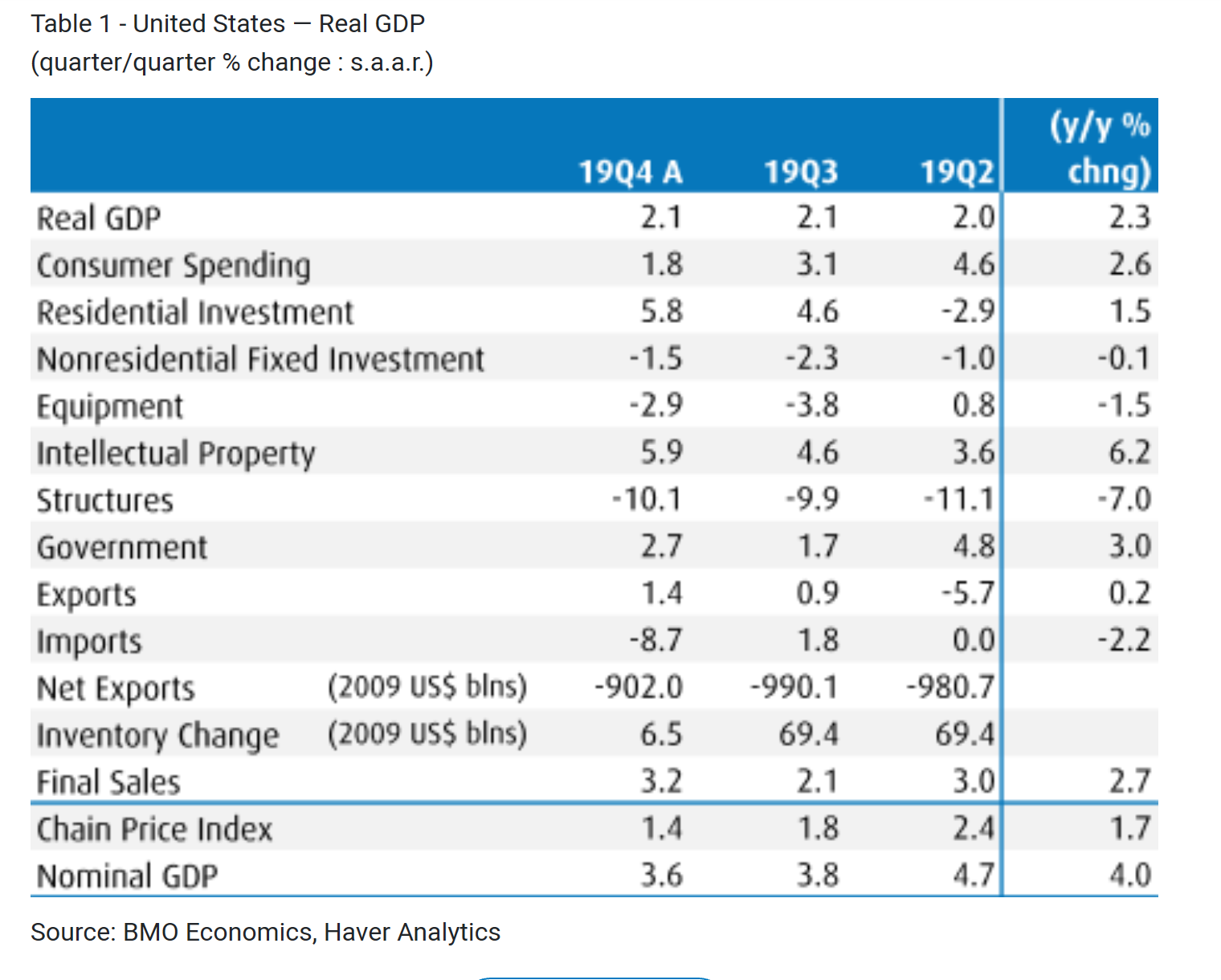 However, based on numbers calculated by government Actuaries[4] for the Center for Medicare and Medicaid Services (CMS), we know that healthcare expenditures account for 17.7% of GDP, and it grew by 4.6% in 2018, to a total of $3.6 trillion (USD) or the equivalent of $11,172 (USD) per person.

Recently, I attended an investment conference and heard a world-famous economist effectively say that “Most people have underestimated the strength of the U.S. economy; the American consumer was alive and well.”  Furthermore, he stated, “Anyone who discounted the American resiliency, could be making a mistake.”  He went on to state, “The only point of concern or maybe opportunity was U.S. manufacturing that accounts for about 14% of GDP.”

Maybe one of the reasons that the U.S. is resilient is because of healthcare.  This reminded me how valid the phrase The United States of Healthcare is becoming as 18% of GDP may effectively grow at twice the rate of the economy – more on this topic to come in Part 3.